WordPress Development vs Drupal – Which One is Better in 2021? 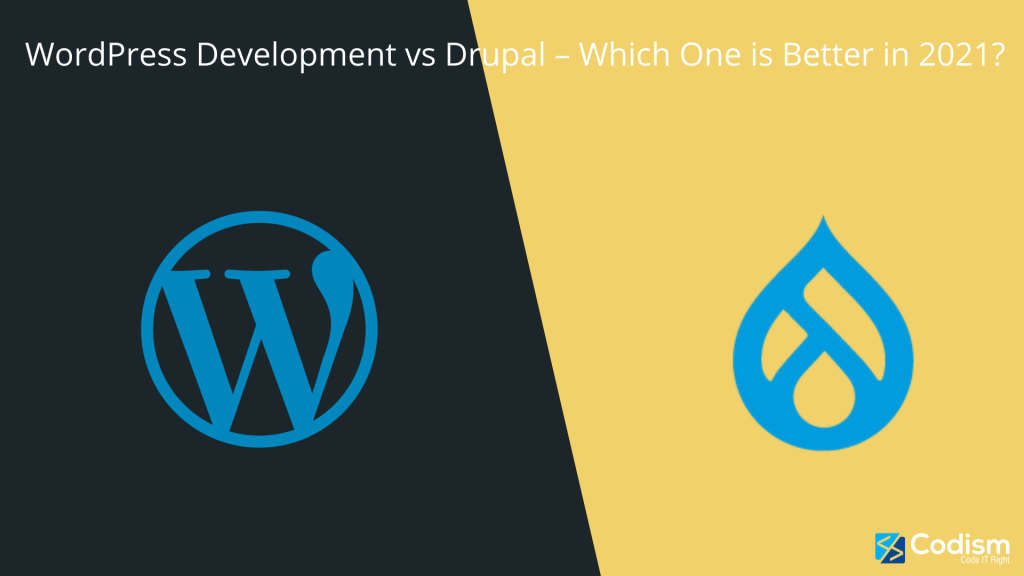 You might have heard a lot of WordPress and then Drupal too. Both are popular and powerful content management systems. Confused to decide on what to use? Well, this article is for you!

Here, let us analyze and compare wordpress with drupal on various grounds and try to understand which one is the best choice for you.

Both the content management systems are fairly popular. However, if you look at the numbers, WordPress has a staggering amount of market share in CMS of 45%!

Comparing it with Drupal, which is older than WordPress, has only 1.5% of CMS market share. So, in terms of sheer popularity, WordPress wins. As an effect, WordPress has a more strong community than Drupal.

When we come to WordPress, it is extremely easy to use where it provides simple dashboards for configuration of websites. It is also very famous for its just 5 minute install.  As it is initially a blogging platform, it is further more simple to create blogs. If your website has functionality more than it, you have to install certain extensions.

However, with providing this ease of use, WordPress has put a certain cost on the flexibility of it. When your site becomes more and more complex and personalized, wordpress might not be easily able to keep up with your demands.

Drupal, on the other hand, is not as easy to use as wordpress. Its initial learning curve would be a little bit more than it and as such Drupal is not something a complete beginner could catch up with. But, Drupal’s power and flexibility for creating complex websites is much more than wordpress.

The Internet by default is a very unsecured place and you need a lot of mechanisms for ensuring security for the websites.

Both WordPress and Drupal have put a lot of work and security mechanisms in place but as WordPress is highly popular with a lot of websites using it, it has frequently become the target of more hacks and thus exposure of more vulnerabilities.

Also, people using wordpress tend to use a lot of outdated plugins which isn’t much prevalent in Drupal.

So, considering all these, we may say that WordPress users are slightly at more risk than Drupal users.

Search engines are the main driver of traffic in the internet and Search Engine Optimization is important for any website. Also, Today many access the internet from their mobile and expect all of the websites to work there without any eros. Basically, for a website to be mobile friendly, the layout on the mobile too needs to be polished and the website must load fast enough. That is, mobile must not have any compromises on user experience.

SEO depends on a lot of factors including performance, site structure and others. Both WordPress and Drupal have excellent systems for making your sites mobile and SEO friendly with built in mechanisms and a lot of plugins and themes.

So, in this aspect, we can say that WordPress development and Drupal tie.

Along with all the factors, the cost of using a particular platform is a huge concern for people. While both WordPress and Drupal appear to be free, there would be hidden costs as you move on with the project later on in the form of expensive extensions.

The Free version of WordPress does a basic job and if you want higher features, then you must go for expensive options.

Coming to Drupal, As we mentioned earlier, Drupal is not so easy to use for people which might necessitate having developers set it up for you to use. This becomes the initial cost of using Drupal.

However, from then, all of the Drupal developed modules are free and you can build very complex websites relatively cost efficient than wordpress.

So to say finally, Drupal would have some initial cost higher than wordpress development but easy to get more features later on, but wordpress initially costs less but might become expensive later.

As you can see, WordPress and Drupal are very close to each other on various fronts. WordPress is good in certain concepts and has limitations in certain areas which is the same for Drupal. By carefully analyzing what you value, choose the perfect platform for your website.