Why We Migrated from Python to GoLang 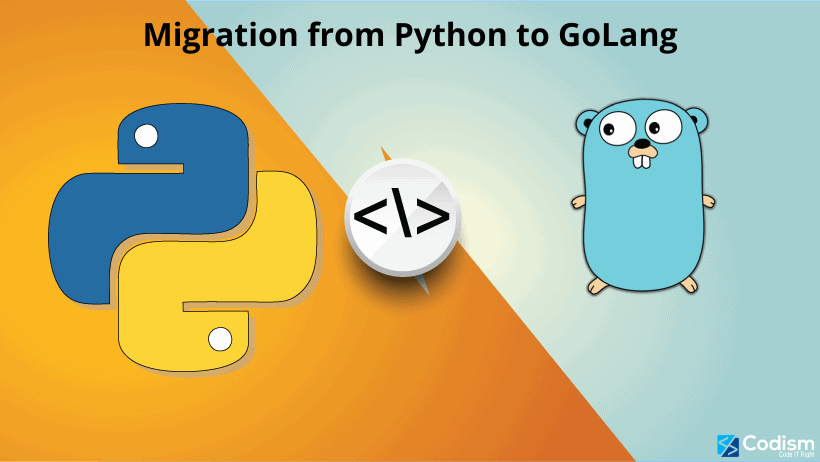 There are 10 reasons why we migrated from Python to Golang. Python is a high-level scripting language. It is mostly used in developing web and desktop applications. Coding in Python is relatively easy with simple lines of code doing the operations compared to other languages. Few disadvantages like no concurrency, memory management and more compiling time exist with python. Golang provides solutions and is pretty much advanced as it was developed in 2009 and regularly updated.

It is not to say that python is not easy to code. It is also easy but you will observe minimal options in Go. It is easy to code, readability is more and compiles time is fast. These factors will make Golang step ahead of python.

Python is interpreted language while Go is compiled language. Being compiled language, Go generates the machine code directly from your code. This is the reason why Go is one of the fastest executable languages ever developed.

3. Availability of many native tools

We are already living in the era of “Code once, use it for different platforms”. Go has taken this concept to next level. With the help of native tools available, you code the program once and it can be published to Linux, MAC and even to mobile platforms like IOS and Android.

Performing multiple operations at the same time is referred to as concurrency. Python Development uses the threading concept to achieve concurrency. But Golang has in-built concurrency. The concurrency process in python wants more resources and memory compared to in Go. Golang is a clear winner in this factor.

Python is dynamic typed while Go is static typed language. Python which is a dynamic language is generally developed keeping in mind that a programmer writes less code to achieve more functionality. The code is checked during run time. But in static language even though you write more lines of code to achieve the same functionality, compiling time is less. It’s because static language is more hardware friendly. In static typed, errors can be checked during compile time itself.

Python has no memory management while Go offers several routes for managing memory. Goroutines are used to take care of internal requests to process simultaneously. Each one is of 1KB size mostly while the size of thread extends up to few MB. Memory and CPU resources are saved which can be used for other operations. Go has a lot more tricks under its sleeve for memory management.

Google has focused on major issues that are slowing down the compiling time. Golang is fully optimized, minimal and feature-rich. Achieving concurrency has enabled the compiler to perform more operations at the same time. Being static language, bugs are encountered during compile time which can be rectified before running the program. Overall, Golang is optimized in all possible ways.

In General, it will take a few hours to rebuild server programs. It will take a few days for Google Chrome to totally rebuild. Waiting several days for a clean rebuild of big programs is a huge loss of time. Go has significantly impacted this issue. It has reduced compiling and rebuilding time to minimal. As it uses less memory, high performance can be observed.

You can develop web applications with python. You can develop apps for different platforms on PC, MAC and even on mobile platforms with Golang. Cross-platform development is one of the main advantages of Golang.

As said, python is used to developing web apps. Examples include Instagram, BitTorrent, Reddit, Youtube, Quora and much more are developed with python. Bookmyshow, Hugo, Docker, and Monzo are some of the applications developed with Go.

Here are the reasons why we migrated from Python to Golang. As Golang is a better choice compared to Python in terms of development. Processing time and coding conventions are important factors and Go beats python in both of these aspects.