Go vs Rust Web Development : Which One to Choose? 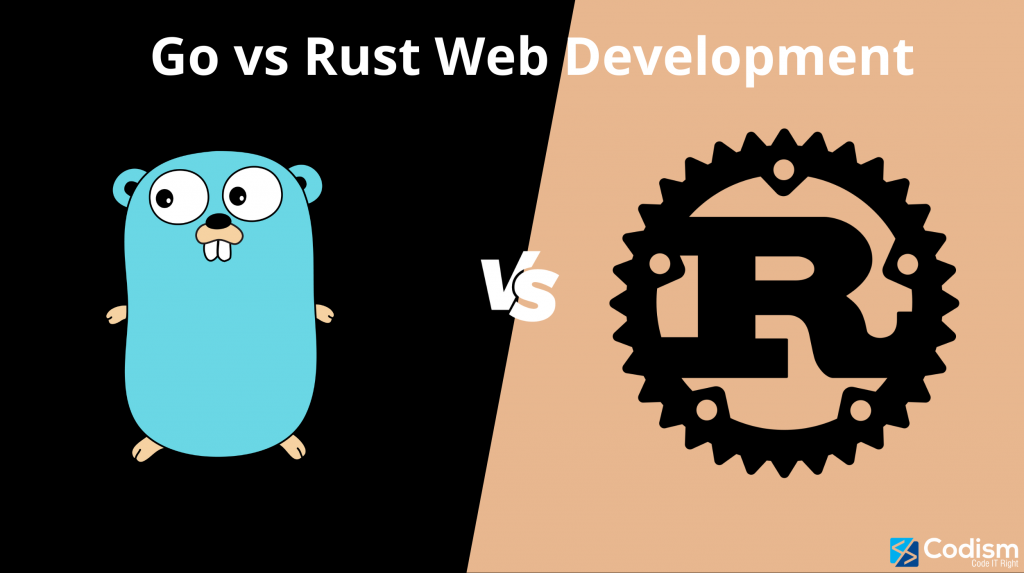 With hundreds of programming languages available and many of them being highly popular, deciding what language to choose is hard for beginners and sometimes, even for experienced developers. Let us now take some aspects and compare go vs rust web development:

The same thing happens with Go and Rust as both of them are highly popular and has been touted great for similar fronts.

In this article, we will compare prominent features of both languages and try to come to a conclusion about whether Go is better than rust or other ways. However, a conclusion does not necessarily occur between the two, as both of them could be great in their own respects with their own disadvantages in which case the requirement is what that dictates which language is to be used.

1. Simplicity & Ease to use

Simplicity & Ease of use is important for a language as the code written would be read for many times under different contexts at a later time.

Go has widely described as one of the simplest languages which can be easily mastered. Also, Golang has sacrificed many features that are considered great only for the sake of simplicity. On the other hand, Rust is a bit complex and has a steeper learning curve than Golang.

So, in the aspect of Simplicity, Golang is preferable over Rust.

Both languages present themselves as fast ones. Both are compiled and use various techniques for increasing the performance of your code.

However, in certain cases, Rust has outperformed Go in performance. There are many reasons for it of course. For one, Go uses a garbage collection method (which will be discussed in a later section) which would affect performance. It also sacrifices some features for simplicity.

So, in this aspect, if you see strictly the performance of the running application, Rust is preferable over Go.

Concurrency is running more than one sequence of tasks at the same time. It is incredibly advantageous as it lets to leverage the power of multi-core CPUs and respond to more requests at a single time.

Both Go and Rust give ample support for Concurrency. But, Go has a simpler and powerful approach for concurrency through Goroutines, and also, in fact, there are many people out there who switch to Go just for its concurrency!

So, in this aspect both are great, but Go is a bit better than Rust in the view of simplicity.

There are some cases in which Rust could leak some memory while there might be none in the case of Go. So, in this regard, while both have powerful Runtime memory management systems, Go is slightly ahead of Rust.

Like these, there are lots more points to compare between go vs rust web development. Both languages are designed and developed by great teams with great ideas and have good reasons for what they have to do. In our view, no one of them is universally better than each other. Go has certain features that many people would love and ahead of Rust in some cases, Rust has also it’s base of great features, and finally, it all is based on the requirements and viewpoints you have